The Rumpus Letters for Kids

The Rumpus Letters for Kids is a subscription for - yup - kids, classrooms and libraries edited by kidlit maven Cecil Castellucci.

Kids, classrooms and librarians who subscribe at the low-low rate of $4.50 a month (cheap!) get letters from authors like YOURS TRULY via ACTUAL SNAIL MAIL. And they can write us back too. Letters take on many forms, and here's mine, which was sent to all the lucky subscribers on July 15th.

If you're interested, sign your kid or classroom or library up. With the holidays approaching faster than you think, The Rumpus Letters for Kids makes a GREAT GIFT. And I did mention $4.50 a month, yes? (cheap!)

MY GRANDADDY'S TACKLE BOX - A story for YOU, from Sally Nemeth 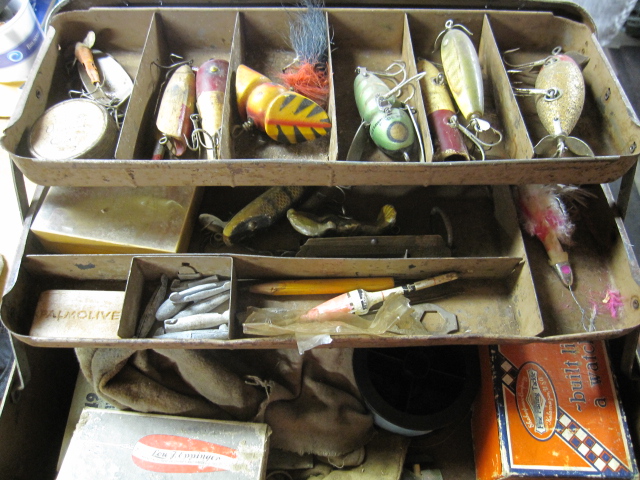 The last time I visited home, I found my Grandaddy's tackle box. It's full of old fishing lures and tide charts and even a very old bar of soap to wash your hands after you've been touching WORMS. And it made me remember the first and last time I ever went fishing with Grandaddy.

I was seven, and we were living in Delaware, about a half hour away from the Brandywine River. Grammy and Grandaddy were staying with us for a couple months. Grandaddy had been in a car accident, had broken both his legs and was in two HUGE casts. He needed a lot of help.

So he recovered in a big hospital bed in the den where he could watch TV or read. But Grandaddy had grown up on a farm and was used to doing things like riding horses and fishing, and being stuck indoors with two HUGE casts on his legs really drove him crazy.

When the two HUGE casts came off and he could walk again, even on crutches, he didn't waste any time. While Mom packed him a lunch, he packed up his tackle box, dug up some worms, and hopped into our station wagon with his rod and reel and a bucket in the back. I begged to go. I loved being down by the river and besides, I'd never gone fishing before. My dad, who'd grown up in the city, didn't fish.

After all that time being cooped up with family, I think Grandaddy probably really wanted to be alone, but he told my mom to make another sandwich, he grabbed another rod and reel and off we went on our big fishing trip.

It was a beautiful early summer day. The sun was shining, the weeping willows on the river banks were dripping with leaves and the lilacs were in bloom. Grandaddy stuck a wiggling worm on my hook, which made me feel sorry for it, so when I flung my line toward the water, I was happy to see the worm come off the hook and wriggle away. Still, I kept casting my empty hook into the river to make it look like I was really fishing.

Grandaddy really was fishing. One after another he reeled in beautiful speckled sunfish. They looked like this: 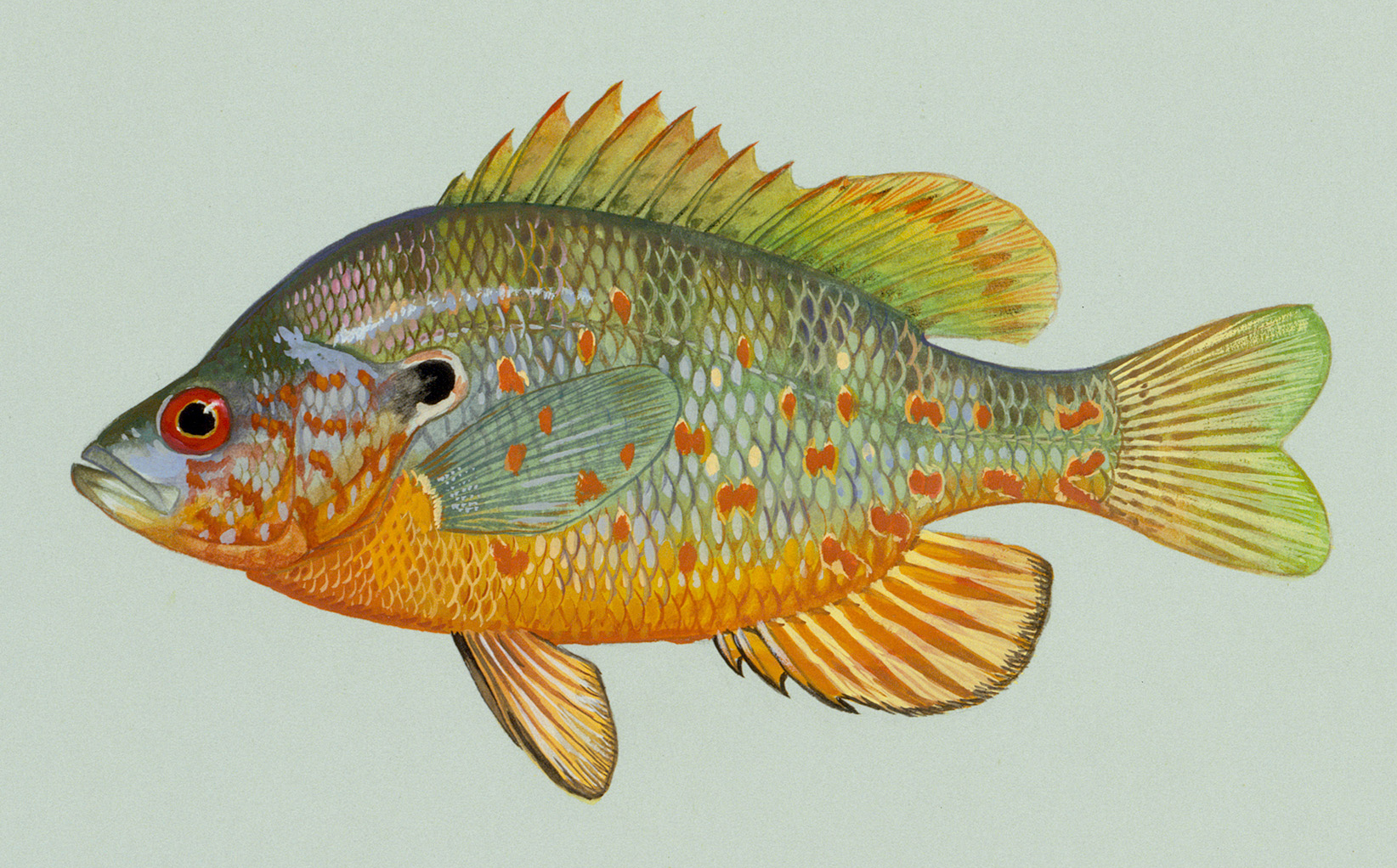 He caught fish after fish. Some, the size of his hand, he unhooked and tossed back in, but if a fish spanned both of his hands he kept it, setting it gently in a bucket he'd filled with water. Happy to be off the hook, they swam around and around.

Soon, I quit fake fishing and started watching the fish in the bucket, giving each a name that fit its personality. One swam around really fast, so it was Speedy and another swam really slow, so it was Pokey. Fish after fish joined them, each getting a name.

Finally, when the lunch bag was empty and the bucket was full, Grandaddy declared our fishing trip was over. We got in the car, he wedged the bucket between my feet so it wouldn't spill, and off we went, back home.

When we got there, my mom looked in the bucket and said, "Well Dad, I guess I know what we're having for dinner."

Grandaddy started to sharpen a knife. I looked in the bucket at Speedy and Pokey and all my new pals, happily swimming around, not knowing the terrible thing that was about to happen to them.

So I did the only thing I could do.

I threw a fit. I wailed and cried. I stomped my feet. I REFUSED to let him kill my new pets.

Grandaddy said, "Come on, Sally. You eat fish, don't you? Why do you think we went fishing?"

But I wasn't having it. No way. These fish were my FRIENDS. Not FOOD.

He wedged the bucket between my feet again, and drove the half hour back to the river. Wading into the water with me, he submerged the bucket and let all the fish go. I watched as they swam away, their orange spots glittering in the sun, and I was both happy and sad to say goodbye. So Grandaddy did it for me.

We got back in the car, drove back home and had burgers for dinner.

After that, I did other fun things with Grandaddy, but that was the one and only time I went fishing with him. If it had been a normal fishing trip where we ate the fish at the end, I'd probably never have remembered it. But since he drove back to the river and let the fish go, just because he loved me more than he loved a fish dinner, I'll never forget it.

At the end of this letter, I gave kids my agent's address so they could write me back, and told them that I loved to hear stories too. But you all know where to find me, and you can tell me as many tall tales as your hearts desire. And even if it's a fish tale, I might actually believe it.
Subscribe
Comments for this post were disabled by the author